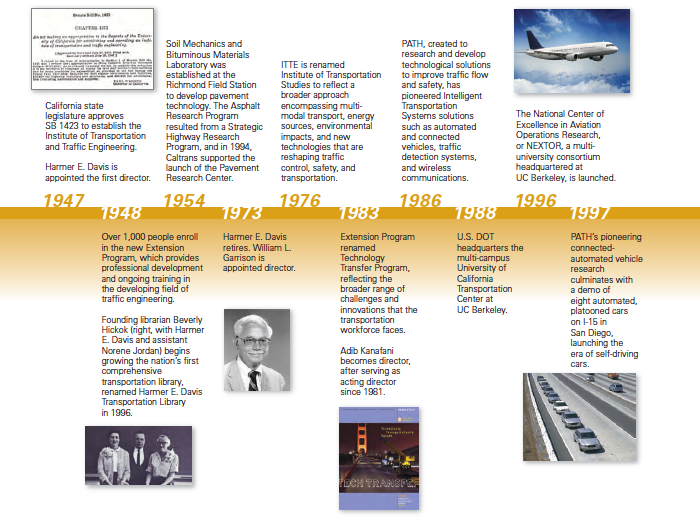 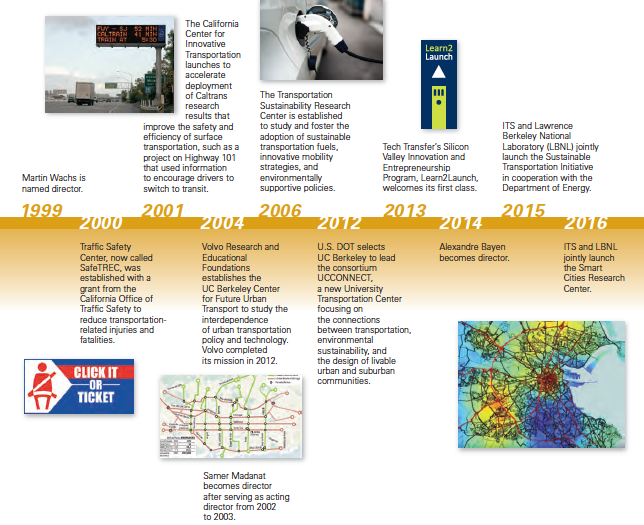 In the aftermath of World War II, America was on the move. People were buying cars, the population was shifting to the suburbs, trucks were becoming a more common way to transport goods, and air travel was on the rise. Yet the transportation facilities to accommodate these changes, and the trained professionals to plan and design them, were lacking. California’s economy and populace were rapidly expanding, and the state’s infrastructure suffered from years of deferred maintenance and investment.

Recognizing the need for transportation research and training, the state enacted Senate Bill 1423 in 1947, creating the Institute of Transportation and Traffic Engineering at the University of California – now known as the UC Berkeley Institute of Transportation Studies (ITS). With a core budget of $710,000, UC Berkeley President Robert Sproul asked Harmer E. Davis, a Berkeley professor of civil engineering and well-known transportation expert, to establish the new organization. ITS has since leveraged this core funding to secure tens of millions in research contracts and grants annually.

From its inception, the Institute transformed transportation in California and beyond. In its early years, the Institute introduced advances in highway design, operations, pavements, lighting, signage, and vehicle safety that subsequently were adopted by other states and the federal government. ITS research on the planning and design of airports became the model for airports globally. Work at ITS also contributed to the creation of the Bay Area Rapid Transit system, the first modern rail transit system built in the US, and helped design the reorganization of bus services and the new public agencies to manage them.

In the 60s and 70s, the waning of new road building and growing concerns about community impacts, environmental damage and oil dependence led to a new emphasis on balanced transportation systems and strategies for their effective management. ITS researchers developed new travel demand forecasting methods that became the foundation for regional transportation planning across the country and internationally. They also undertook studies in demand management, traffic calming, and transportation pricing, worked with federal and state legislators on transportation and air quality regulations, and explored the potential for new fuels and new vehicle designs that would reduce emissions and dependence on fossil fuels.

By the 80s, traffic congestion and funding shortfalls demanded attention, and ITS’s work on traffic operations identified and developed cost-effective ways forward. The transit-land use connection also became a major focus of research and entered practice as a way to encourage transit use and as a sustainable communities strategy. In the 90s, as the internet was deployed and advances in information technology and sensors accelerated, ITS led in the development of innovative technological solutions to make transportation smarter and broaden mobility options. Contributions from ITS included pavement management systems, vehicle-highway automation strategies, and high speed rail research, as well as new methods of data collection using mobile phones and sensors. In addition, ITS researchers investigated the prospects for carsharing, tested and evaluated road pricing and parking pricing strategies, introduced new multimodal roadway designs for urban spaces, and led research on greenhouse gas reduction strategies.

Over the past twenty years ITS has continued to lead with major research programs in alternative fuels, wireless networking, computer vision and machine learning, urban data analysis, and geolocation to produce such innovations as real-time traffic monitoring, automated vehicles, intermodal coordination, and connected corridors. These advances have helped relieve congestion, increase safety, bring economic vitality to urban centers, and sustainably enhance mobility. ITS also has pushed forward with work that will assure that transportation systems support social equity, environmental protection, and economic prosperity.

The State renewed its commitment to ITS with a one-time increase in funding in 2016 and a more permanent increase under the Road Repair and Accountability Act of 2017 (SB1). SB1 provides each of the four ITS campuses – Berkeley, Los Angeles, Davis, and Irvine – with an additional $1M annually to support research that will help the State maximize the economic, environmental, and social benefits of transportation investments. This new infusion of funding greatly expands the impact ITS research will have in advancing cutting-edge and cost-effective California transportation policy and practice.

Today, ITS faculty, researchers, and students from a dozen academic departments continue to carry out research that frames government policy, analyzes human behavior, and addresses infrastructure. Our alumni work around the world in industry, academia, and the public sector, contributing to the economies of California and the United States and leading the broad field of transportation across the globe.

University of California Center on Economic Competitiveness in Transportation