ITS Ph.D. student Juan Argote, a Barcelona native, has received an Eisenhower award for research related to improving the reliability of multiple bus lines traveling on a particular transportation corridor. 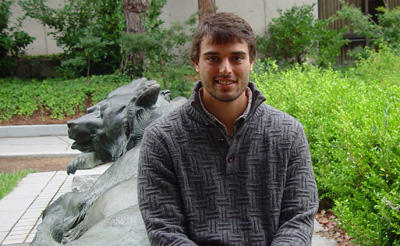 Other students at the Institute have studied bus bunching—an irritating situation well-known to passengers whose bus is late, and then finally appears unusually crowded and with two or three much emptier buses following in quick succession. This so-called bus-bunching phenomenon is the result of a domino effect of delay, Argote explained.
“The dwell times of buses at the stops increase with the number of passengers waiting to board. When the first bus is delayed, the delay of that bus at the following stops generally increases because at each new stop there tends to be more passengers waiting. So the delays keep compounding all along the route.”
As the first bus gets further behind, the next bus finds fewer passengers at each stop, so its dwell time at each stop decreases. Over time it catches up with the first bus.
“All transit agencies that operate bus services have to face this issue,” wrote Argote in his proposal for the Eisenhower Transportation Fellowship. “Almost none have implemented real-time control strategies that can effectively prevent bus bunching. Most of the existing strategies simply insert a large amount of slack time in the schedule to account for a worst case scenario, degrading the speed of their system.”
To combat bus bunching Argote has conceptualized a new control method that he believes could achieve a 10 to 20 percent reduction in travel times, depending on the level of demand. In addition, he notes that most of the work on bus bunching so far has concentrated on one bus line, while in most urban areas there is usually more than one line traveling in a given corridor.
“The second goal of my Ph.D. research is to expand the optimal control method to scenarios where multiple lines coincide. This will extend the range of applicability of these strategies, contributing to the goal of making bus systems a competitive transportation mode in the urban framework.”
Finally, Argote will use a small study of the UC Berkeley campus shuttles that he has completed and will allow him and fellow researchers to build a simulation toolbox to test different bus-bunching situations.
Eisenhower Transportation Fellowships allow students to pursue advanced degrees in transportation-related fields by contributing to tuition and living costs. Fellows also receive funding to attend the annual Transportation Research Board conference in Washington, D.C.
Argote, who attended Barcelona Tech as an undergrad, arrived three years ago to study under Professor Carlos Daganzo, also a native of the Spanish city.