This article originally appeared on the UC CITRIS news site 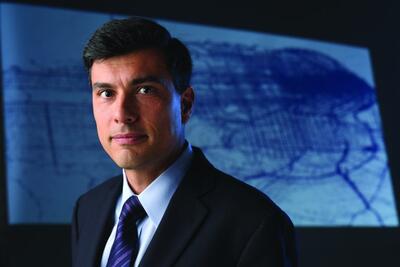 “My entire career and history as a faculty member has been one of deep collaboration and connection to CITRIS,” said Alexandre Bayen, a UC Berkeley professor of engineering and a principal investigator (PI) at the Center for Information Technology Research in the Interest of Society and the Banatao Institute (CITRIS). “From moving into Sutardja Dai Hall when it opened in 2009, to supporting the launch of interdisciplinary research projects, CITRIS has propelled my academic career.”

Bayen’s research employs mathematics to model distributed parameter systems. Applications from his research and teaching in the College of Engineering include transportation networks—such as air traffic control and highway systems—and distribution systems, such as those used for water. Bayen studied mathematics as an undergraduate student at Ecole Polytechnique in France. He then came to the US to study aeronautics and astronautics at Stanford University, where he earned his doctorate in 2004 before joining the faculty at UC Berkeley in 2005. He’s currently the director of Institute of Transportation Studies and a faculty scientist at the Lawrence Berkeley National Laboratory.

“My entire career and history as a faculty member has been one of deep collaboration and connection to CITRIS. From moving into Sutardja Dai Hall when it opened in 2009, to supporting the launch of interdisciplinary research projects, CITRIS has propelled my academic career.”

The research conducted at Bayen’s Mobile Sensing Lab has frequently intersected with CITRIS programs and research thrusts, resulting in several collaborations. One such project was the Floating Sensor Network. Begun in 2011, this project launched a network of mobile sensors to offer real-time, high-resolution data in hard-to-map waterways.

One region of focus for the Floating Sensor Network was the Sacramento-San Joaquin River Delta, which provides drinking water to millions of Californians and is the largest freshwater tidal estuary in the western US. Introducing sensors to the state’s complex and hard-to-track waterways provided researchers with information about pollutants, salmon migration, and how freshwater and salt mix in the delta’s ecosystem. The resulting data from the sensors’ deployment helped create what Bayen calls “water maps” that can help guide further research, the use of government funds for environmental management, and public policy decisions.

Bayen also contributed to the research and mentorship of another CITRIS seed-funded project, SafelyYou, a system of AI-enabled cameras that detects falls in real-time to support older patients with dementia and their caregivers. This system alerts caretakers and allows them to review when and how falls take place to identify patterns and prevent future falls. Non-fall video is automatically deleted within 60 seconds and no audio is recorded. SafelyYou also provides consulting on how to prevent falls, based on data from the videos.

SafelyYou was created by UC Berkeley graduate student George Netscher who was co-advised by Bayen and Berkeley professor Trevor Darrell. “Alex’s support was instrumental in creating SafelyYou and successfully launching the company,” said Netscher. With the support of CITRIS seed funding in 2015, SafelyYou tested its technology, developed a proof-of-concept, and created a business plan. David Lindeman, director of CITRIS Health, advised and mentored Netscher and helped make connections to potential customers. SafelyYou is now headquartered in San Francisco and provides its fall detection systems in communities across the US and Canada.

SafelyYou, a system of AI-enabled cameras that detects falls in real-time to support older patients with dementia and their caregivers. Video by CITRIS Productions.

More recently, Bayen has been working on the Congestion Impacts Reduction via CAV-in-the-loop Lagrangian Energy Smoothing (CIRCLES) project. Bayen and the team of CIRCLES researchers are hoping to reduce instabilities in traffic flow, a phenomenon known as “phantom jams”—traffic slow-downs with no apparent cause that are the result of human behavior. These phantom jams cause congestion and waste energy. Prior research on closed-course testing has shown that phantom jams can be reduced using autonomous vehicle technologies and specially-designed algorithms. The CIRCLES project is working to apply this technology to real-world highways and city streets, where reducing these negative traffic effects could save energy and help make traffic more efficient.

Since CITRIS itself is a distributed system, Bayen is well suited to recognize when it is running smoothly and has helped to overcome bottlenecks in his long partnership with the organization. Bayen credits what he calls CITRIS’s visionary leadership of the past and present—Ruzena Bajcsy, S. Shankar Sastry, Paul Wright, and now Costas Spanos—with promoting innovation and collaboration among the institute’s PIs, researchers, students, and staff.

“UC Berkeley needs leaders with vision; it’s essential to our research, teaching, and learning,” Bayen said. “So a strong CITRIS director is someone with vision, and these directors have all been fantastic visionaries who have supported faculty and student research that pushes technological boundaries. That’s how we keep innovation alive.”