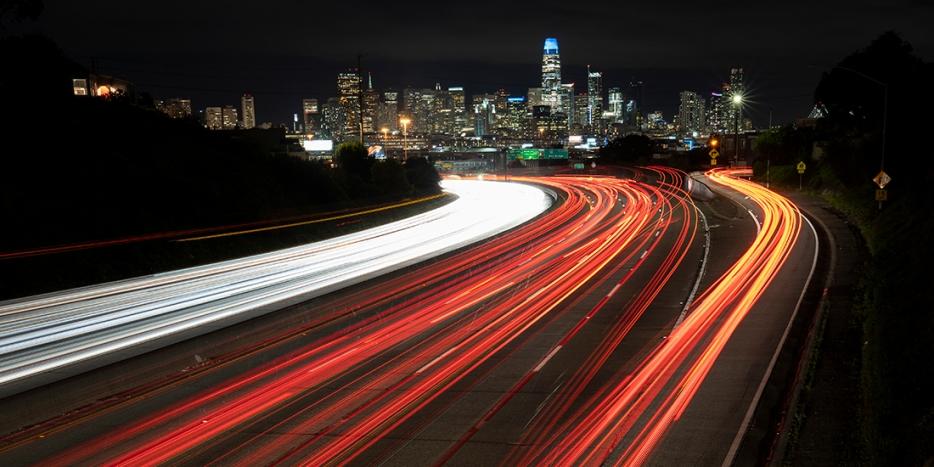 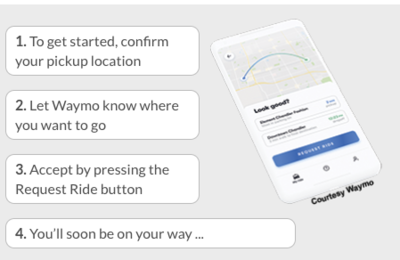 Users of ride-sharing apps like Lyft and Uber will find this interface [at right] familiar, butithailssomething novel: a Waymo One self-driving Volvo SUV. The ride service, currently limited to a set of “early riders” around Phoenix, Arizona, launched last December. A month later, the 2019 Consumer Electronic Show’s glut of autonomous vehicles, or AVs, included consumer-market cars parading along the Las Vegas Strip and a Mercedes-Benz concept car with switchable bodies — a multi-passenger taxi and a cargo hold for freight. The French company EasyMile is testing its driverless electric shuttles in Europe, Singapore and the United States.

These fast-paced advances and investments are part of a revolution. With roughly 30 companies now developing fully automated vehicles, the convergence of vehicle automation and sharing is creating the biggest disruption to mobility since gas-powered vehicles hit the road. The gee-whiz technology gets a lot of attention, but the real thing to watch, experts says, is us, the traveling public. When driverless vehicles begin integrating into an increasingly complex transportation ecosystem — one that includes partially automated vehicles, sharing and pooling services, not to mention delivery vehicles, robots and drones — the public’s travel behavior will shift as we adjust to new mobility choices. What will the impacts be on traffic and transit? How will jobs and land use shift? Will services be equally available to everyone or just another amenity for the wealthy?

For 20-20 hindsight, look to automobile adoption, which changed land use from a dense urban core to suburban sprawl, and splintered the social structure into those who could afford cars and those who had to rely on transit. It introduced traffic congestion and increased pollution. It cost transit-related jobs, but also created a whole new economy around vehicles and fuel.

“We have to decide where we’re going and put policies in place to get there,” says civil and environmental engineering professor Joan Walker (B.S.’91 CE), who specializes in travel behavior. If we want low congestion, low emissions and social equity, she says, we must start now. That means discarding cartoonish images of either Jetsons-like free-flowing traffic or a dystopian horror show of empty vehicles, called “zombies,” locked in perpetual traffic jams. The reality, experts say, falls into a complex middle ground: A gradual integration that society can optimize with measured policies that address consequences — both wanted and unwanted — of how we make travel choices.

Congestion is a big unwanted consequence. With population and urbanization on the rise, travel demand is increasing, especially in dense areas. Strategies like HOV lanes and carpooling are meant to reduce low-occupancy vehicles on the road. But personal AVs, especially when they’re zombies — traveling empty after a passenger drop-off, circling or just picking up a pizza — complicate the picture.

That’s because AVs undermine a trade-off central to behavioral economics: Time is money. Every car on the road contributes to congestion, but when you sit in traffic, wasting your time, you’re paying a price for adding to the problem. That personal pain creates a strong incentive to avoid driving, Walker explains — maybe by choosing transit next time. “A self-driving car changes the equation,” she says. Taking your AV still costs you time, but that pain is lessened because you can use your time productively while the car performs the driving task. Zombies upend the equation completely. “If your car is in the traffic jam without you, you’re not paying any personal price for the trouble you’re causing everyone else,” she says.

To study real-world effects of such behavioral concerns, Walker and a research team simulated AV ownership by providing 13 subjects with chauffeurs for a week. Eighty-three percent of households increased their vehicle miles traveled, taking both more and longer trips. Chauffeurs traveled alone (zombies) on 21 percent of trips. Despite obvious caveats — the novelty, a small sample — the findings indicate an alarming travel increase, including low- or zero-occupancy trips, when AV owners don’t pay time and inconvenience costs.

A penalty fee is one way to make AV users pay a cost for putting vehicles on the road. One such “zombie tax,” a per-mile charge on empty vehicles, is already being studied by the Massachusetts legislature.

Using technology to fill empty seats with passengers or freight can increase the efficiency of cars on the road. Zombies are just a new form of deadheading — single-occupancy trips that result when a taxi or truck driver delivers a load, then returns to a base alone, explains Susan Shaheen, an adjunct transportation engineering professor who co-directs Berkeley’s Transportation Sustainability Research Center. Apps to generate demand for those empty seats are already on the market.

“Induced demand is the notion that if we build it or make it easier and cheaper for you to travel, you’ll travel more,” Shaheen explains. “So it’s not just a question of those zero occupancy miles, but do AVs create a demand for even more trip-making by making it easier to travel?”

Getting the price right

That’s why sharing modes figure so prominently into AV development. Sharing reduces low-occupancy trips, and the added mobility options could help discourage private vehicle ownership. A 2010 study by Shaheen and her colleague Elliot Martin found that 25 percent of roundtrip car-sharing members sold a private vehicle and another 25 percent delayed purchasing a new vehicle. Their 2016 study of car2go’s one-way sharing service found that 2 to 5 percent of members sold a vehicle and 7 to 10 percent delayed a vehicle purchase. In an unrelated 2016 survey, 40 percent of ride-sharing users stated they had reduced their driving.

“I think we’ve already started to see what the future looks like through shared mobility,” Shaheen says. “What happens to people’s behaviors when they don’t need to own a car? Automating these modes can take us a step beyond that.”

When Walker recently booked an Uber, the ride-sharing app offered her a pooling option — a lower price to share her trip with other travelers. But, she confesses, the pool price wasn’t low enough to entice her to forgo a private ride.

When autonomous ride-sourcing fleets hit cities, she says, finding the pricing sweet spot will be critical. Too expensive and people won’t try it, much less make it a go-to option. Too cheap, and people might take so many trips that congestion will increase. And once pricing and other strategies shift demand, tweaks will be needed, Shaheen’s research shows. “We’re human. We adapt,” Shaheen says. “We’ll need to make adjustments to rebalance supply and demand.”

Access is another key policy lever for preventing congestion, experts say. Rules can limit curbside pickup and drop-off access to high-occupancy vehicles, especially in high-demand areas like downtowns. Such right-of-way policies are already in force at airports, where signage points travelers to app-based ride service locations.

The idea isn’t simply to reduce travel, Walker stresses. “The added mobility AVs will bring is a great thing. It can bring freedom to people who are older or disabled; it gets us to jobs, entertainment, shopping. We can multitask.” There’s also a promise of added safety if human error — the cause of 94 percent of accidents, according to the National Highway Traffic Safety Administration — is subtracted from the picture.

That’s still a big “if.” Many researchers think we have a long way to go before the safety potential is realized.

Trust and ethics issues — Are we comfortable with no driver’s seat? Must vehicles “choose” between crashing into the school bus or the senior citizen? — also receive research and media attention. But Shladover thinks trust will develop naturally as people gain experience with lower levels of automation.

Walker also sees these human factors as the lowest barrier to implementation. “The value proposition is so high that people will get used to it — just look at smart phones. If 10 years ago someone asked us to carry a device that tells companies where we go and what we buy, would we have agreed? People would say, ‘No way!’ But we do it because it provides such a value,” she says. “AVs are going to be like that — if they’re safe enough. We have to get over that safety hurdle.”

Shared mobility research also raises social-equity concerns. In a 2016 survey, a quarter of respondents said they would have taken public transit if ridesourcing wasn’t available. Such drops in ridership can degrade transit, and reduced frequencies and options often hit low-income people and communities of color harder. The public transportation system is required to serve everyone, but mobility companies are private, and so is their data about ridership and pricing response. “Shared mobility blurs the line between public and private transit,” Shaheen observes in several papers.

Subsidies are a way to ensure that lower-income people can afford these services, Walker says, with companies and riders sharing the financial burden. There’s also a role for universities and interdisciplinary research centers — such as Berkeley’s Institute of Transportation Studies, where Shaheen and Walker are faculty members — to mediate the public-private line. “We can analyze multiple private-sector companies with a focus on the public good rather than just the private good,” she says.

For the most realistic view of how AVs will roll out, Shladover says, look to the pilot programs: limited routes without complex driving environments. So, like Waymo One, shuttles will serve neighborhoods or campuses and likely start in weather-friendly Sun Belt states.

Those conditions also support an approach centered on human mobility, not the media-friendly technical glitz of, say, the Consumer Electronics Show. Without a focus on cities and their residents, a 2018 Knight Foundation mobility grant announcement said, “We risk designing cities for new kinds of cars, rather than for people.” The grant supports driverless shuttles in Miami, and, in San Jose, linking AVs with transit and downtown.

More pilots like these can help researchers and the public understand the formidable societal challenges as AV integration continues to unfold.

“The conversation needs to go beyond the dystopian and utopian paradigms, or are AVs shared or privately owned, into something much more nuanced,” Shaheen says. “What are we talking about creating? It’s our moral responsibility to think through socioeconomic issues.”

And, as Waymo One tells its riders: We’ll soon be on our way. So policy action is needed now, before dysfunction becomes a new norm. “The thing about behavior is that that once it’s entrenched, it’s really hard to change,” Walker says. “As engineers we often think that we can build our way to desired outcomes. But we need to deal with the demand side — the people and the behavior — it’s not just technical. We can’t engineer our way out of these problems.”