Imagine your city’s regular (pre-COVID) evening rush hour commute - the buildup of traffic, the stops and starts as cars, buses, and pedestrians all navigate the streets.

Now envision a major accident blocking off one of the key arteries through your cities, completely upending the flow of traffic. It’s easy to picture the short-term chaos that would ensue.

What if you could simulate how that would unfold, before it ever happened, and develop a planned response ahead of time? And what if you could run hundreds of such scenarios, each in a matter of minutes - simulating everything from accidents, to natural disasters, to sudden changes in traffic demand due to a pandemic?

This would truly bring a data-driven revolution to the way that cities plan and operate.

It sounds far-fetched, but this is exactly the work that researchers at the Smart Cities Research Center - a collaboration between UC Berkeley and the Lawrence Berkeley National Lab (LBNL) - have been leading for over a year.

Jane Macfarlane, Director at the center, believes that the key to her team’s work is a highly interdisciplinary approach that brings together expertise in high-performance computing, quantitative modeling of transportation networks, and deep domain knowledge in urban mobility.

“With emerging datasets from IoT devices and communication networks, we can derive valuable insights about how our cities work. But to make these insights useful at an urban scale, we need to deliver them in compute times that allow end-users to make timely real-world decisions, hence our focus on high performance computing. And finally, we also need to validate our work with a truly data-driven approach that reflects the reality of how people behave when traveling within an urban region.”

Since the project’s inception three years ago, the team has risen to the challenge. Using techniques like parallel discrete event simulation - an approach that allows sequential events to be simulated in parallel without losing any information about order or causality - the team has developed cutting edge software that enables them to simulate mobility patterns across an entire urban region.

The challenges in putting together such a system were enormous. Dr. Cy Chan, research scientist at LBNL and the technical lead of the simulator, named Mobiliti, says that the most significant hurdle to overcome was building a system that could scale. “Our platform allows us to harness the power of thousands of computer cores in parallel to accelerate the simulation, making it possible to run large-scale scenarios much more rapidly. To do this, we developed computational methods to remove the requirement for all the cores to synchronize every time step. ”

The end result is a system so powerful that it can simulate an entire region’s mobility patterns without sacrificing speed or detail. A simulation for an entire day’s worth of vehicle trips across every single road in the entire Bay Area can complete in under four minutes.

This incredible performance is key to enabling the vision of a data-driven revolution for municipal transportation departments. To illustrate this, the team used an example of a simulation that recreates the events of February 7, 2019, when the Richmond Bridge was shut down for nine hours due to falling concrete from the upper deck.

The below image visually represents the additional 45% in travel time for trips that would typically rely on the Richmond Bridge. Notably, the closing of such a major artery doubled traffic along Highway 37, and created a 27% spike in traffic across the Golden Gate Bridge. The buildup on the Golden Gate spilled over into San Francisco and across the Bay Bridge connecting the city to cities on the other side of the Bay - Oakland, Richmond, Alameda, etc. 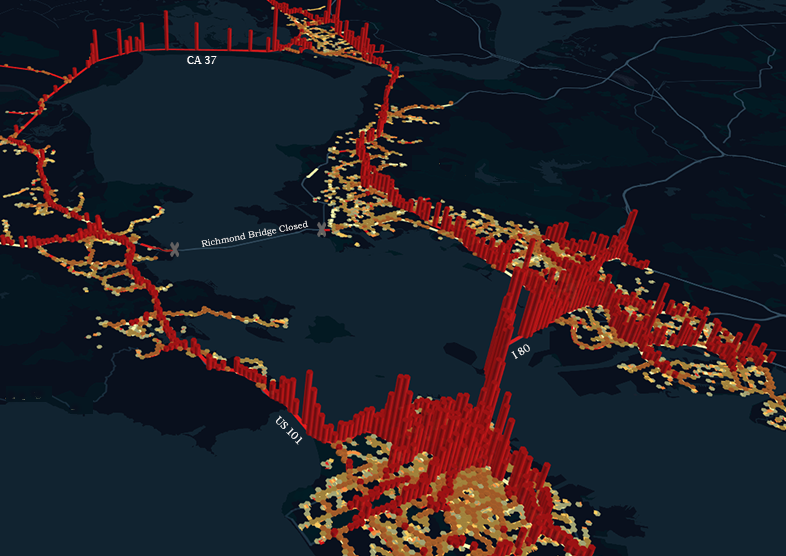 Taller red bars represent longer delays. The region to the bottom of the image with a high concentration of red bars is San Francisco, CA.

Importantly, this simulation reflects how vehicles might respond when each driver tries to simply make the best decision for themselves. With a mechanism to implement dynamic routing, the impact of information about the network status can suggest improved vehicle paths as the day unfolds, similar to the use of navigation applications.

If authorities had been able to coordinate a response that was more globally optimal, they could have seen a net reduction of 155,000 miles and 4200 hours traveled by the impacted vehicles as they sought alternative routes to get home.

Anu Kuncheria, PhD candidate at UC Berkeley, and member of the research team, says that it is this ability to scenario plan, pressure test assumptions, and develop response strategies that make the Research Center’s work invaluable to cities. “Right now, city and transportation officials don’t have the capability to run detailed simulations of real-world events that affect how people move. For example, this year, we’ve seen lots of evacuations forced by fires and hurricanes. Did those evacuations happen in the most efficient way? Are there approaches that could make these go more smoothly? Mobiliti provides the ability to answer such questions very quickly.”

As a recognition of their progress and promise, the Department of Energy has renewed the team’s funding through 2022. Partnering with LBNL and UC Berkeley will be Argonne National Laboratory, National Renewable Energy Laboratory and industry partner Siemens.

Among the next set of challenges that the team will be tackling is building on this foundational simulation capability and embedded machine learning to uncover complex patterns in mobility data and including communication networks as a part of the complex transportations systems management model.