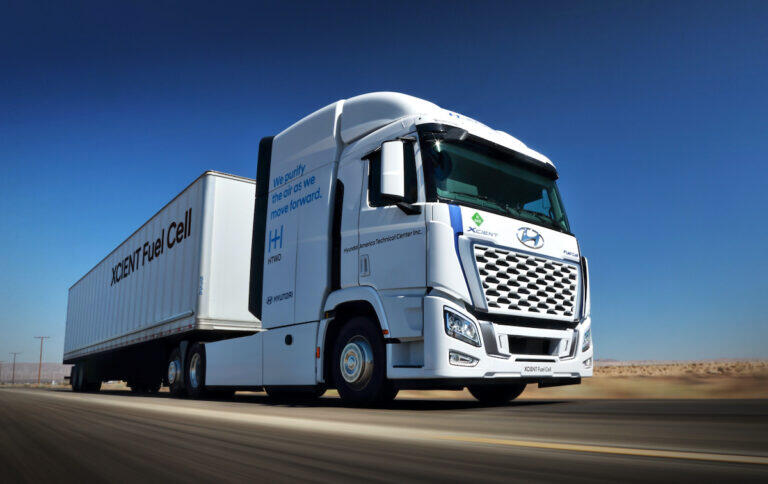 Trucking is taking a new turn, thanks to a new project that will deploy 30 Hyundai XCIENT Class 8 hydrogen fuel cell electric trucks (FCET) in northern California.

“This has been a dream project for some years now, and finally the pieces all fell into place,” says TSRC Co-Director Tim Lipman. “This will have a large impact on hydrogen fuel cell technology research and take us closer to improving air quality in the Bay Area and beyond.”

The project is also funded by over $6 million in cost-share funding provided by the Alameda County Transportation Commission and the Bay Area Air Quality Management District. This project will be the largest commercial deployment of Class 8 hydrogen FCETs in North America. Thanks to the endorsement and support from the City of Oakland and the Port of Oakland, these trucks will service the entire northern California region.

The project will introduce the Hyundai XCIENT Class 8 FCET into the U.S. market, which is a critical step to achieving cost reductions for zero-emission vehicles. The trucks have a proven range of more than 400 miles – enough to complete multiple duty cycles— and the trucks can run from Oakland to Sacramento, Stockton, Modesto, or as far south as Fresno on a single fill of hydrogen.

At UC Berkeley, TSRC and the Goldman School of Public Policy will lead the technical evaluation as well as work on community outreach efforts and communications with port officials, local agencies, and Oakland neighborhood groups with the West Oakland Environmental Indicators Project.

This project will also establish a high-capacity and high-throughput liquid hydrogen fueling station that will support up to 50 trucks and back-to-back fueling.

CTE began developing the NorCAL ZERO project more than two years ago with the idea of collaborating with the East Bay Municipal Utility District to site a hydrogen fueling station adjacent to the Port of Oakland to fuel Class 8 FCETs. CTE assembled a core group of 13 established companies and organizations including strong support and numerous endorsements from elected officials and industry representatives, which made this project possible.