Rail and the California Economy 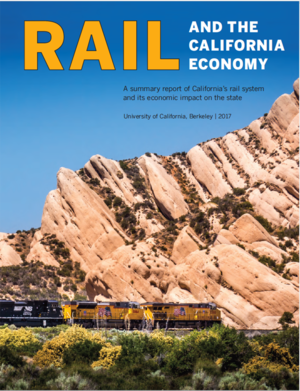 With California's population projected to grow by 21 million by 2050, rail transportation will be vital to the state's efficient movement of freight and people, a new research report concludes.

Titled "Rail and California Economy," the report presents case studies and analysis of freight- and passenger-rail transportation on land use, freeway congestion and the movement of commodities, and those factors' effects on the state's economy.

The report was prepared by the University of California-Berkeley and released by the California Department of Transportation (Caltrans).

Read about the report.

Summary: The state of California depends on rail transport to move people and goods. The economic benefits of freight and passenger rail service for the citizens and businesses of the state take a variety for forms. Rail passenger service is the preferred mode of travel for many daily commutes and occasional trips for leisure and business. Access to rail is an essential ingredient in the business models for many firms, and a valuable amenity to many others. The states seaports, including its three “megaports” (Los Angeles, Long Beach, and Oakland) and smaller niche ports (Hueneme, Humboldt Bay, Redwood City, Richmond, West Sacramento, San Diego, San Francisco, and Stockton) depend on rail connectivity to varying degrees. An emerging, if controversial, example of the importance of rail access is oil-by-rail, which may allow several existing refineries in California to increase the production levels by providing access to non-local sources of crude oil. Economic benefits from rail extend to the larger state transportation system. A large portion of rail passenger traffic, and some rail freight traffic, is diverted from the state highway system. This reduces congestion, emissions of criteria pollutants and greenhouse gasses, and road crashes.

The State supports rail through a variety of programs. The Caltrans Division of Rail and Mass Transportation provides funding for capital projects, operating assistance, and technical assistance that support rail services as part of the multi-modal state transportation system. Since the 1970s, DRMT and its predecessor agencies have devoted substantial resources to developing intercity passenger rail, focusing on three corridors: San Luis Obispo to San Diego, Oakland to Bakersfield, and San Jose to Sacramento (and beyond). While directed at passenger services, these investments have also impacted freight railroads, who own most the right-of-way used for passenger trains. While the rail system generates economic benefit, it also faces challenges that constrain its potential. Shared right-of-way leads to operational conflicts that increase delay and reduce reliability. It also creates design challenges. Stations, for example, must have minimal gapsbetween platforms and rail cars for passenger boarding, but also must allow passage of freight cars with loads of varying widths. Shared right-of-way also limits to the ability of passenger services to increase frequency. Freight railroads, while legally required to accommodate Amtrak trains, demand full compensation for any costs they incur in doing so. Improving passenger rail in a shared right-of-way setting involves gradual increases in cost, until certain thresholds are reached that require major lump-sum investments, for example separate tracking. Another challenge is providing the resources required to keep the existing track, equipment, and rolling stock in states of good repair.

Decision makers at the California State Transportation Agency and Caltrans currently face a number of important rail-related issues. They are contemplating how to integrate the current rail passenger system with the High Speed Rail System and with urban transit systems. This will be a major subject of the next California State Rail Plan, which will be developed beginning in 2015. Also, they are finalizing the California Freight Mobility Plan, which is intended to guide freightrelated capital investments across all the modes that relate to the movement of freight. As pressures to curtail carbon emissions from the transportation sector increase, there is growing interest in shifting freight traffic from truck to rail. Finally, public and private rail operators in the state are grappling with the high costs of implementing positive train control, which federal legislation mandates by the end of 2015.

To inform decisions on the above matters, and more generally to support development of the new California State Rail Plan, in this task order, we will document, analyze, and quantify the contribution of the California rail system to the state’s economy. Examples of impacts to be investigated include:

• Direct savings in cost and travel time to shippers and passengers who use rail service;
• Reductions in congestion, pollution, and crash costs that result from diverting passenger and cargo traffic from highways to rail;
• Effect of rail service on labor markets;
• Contribution of rail freight service to competitiveness of and activity levels at the California seaports;
• Impact of rail service availability on industrial locations; • Impact of rail service availability on agricultural exports;
• Enhanced market values of real estate in the vicinity of rail stations;
• Agglomeration economies resulting from high density development enabled by rail accessibility;
• Option value of rail service in the event of unexpected disruptions on other modes;
• Benefits of rail access to universities and their students.