September 14, 2017
Christine Cosgrove
The former chairman of the House Transportation and Infrastructure Committee from 2007 to 2011, James Oberstar, told transportation engineering and planning students that future transportation progress will likely come from local efforts, not Washington. 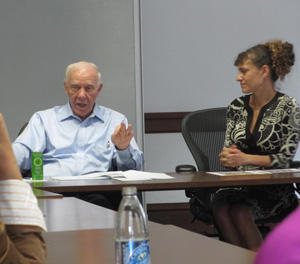 Oberstar, perhaps the most knowledgeable member of Congress on transportation issues and the co-sponsor of SAFETEA-LU, a $286.3 billion program to fund transportation infrastructure, was unable to disguise his frustration with the unwillingness of the current Congress to understand the need to invest in transportation.
Former Congressman James Oberstar talks to students and faculty as ITS Assistant Director Laura Melendy moderates the discussion.
He told students he sees little hope for significant federal transportation funding in the near future, at a time when the country’s economy, safety, and security depends upon a first-rate transportation infrastructure.
“No matter who succeeds as chairman (of the house transportation committee), the committee is filled with know-nothings and flat-earthers,” he told the students at a brown bag luncheon held Friday, Oct. 19, adding, “All things good in transportation are on the chopping block. “
Oberstar, a Democrat from Minnesota, was defeated by a Republican challenger in 2010 after serving 18 terms.
He described the partisan gridlock in Congress as an “extremely difficult environment” to attempt legislation and suggested students focus their energy and talent instead on local transportation ballot initiatives.
“With this Congress and the next, whatever happens will happen at the community level,” he told them.
He suggested students closely examine local initiatives that have failed or succeeded, and “try to determine what lessons can be drawn from those that succeeded.”
Oberstar was the guest of the University’s Robert T. Matsui Center for Politics and Public Service, which brings former members of Congress to the campus for a one-week residency. The program was named for the late Robert T. Matsui, a former congressman and UC Berkeley alumnus.
On Thursday, ITS co-sponsored with the Matsui Center a lecture by the former congressman on the history

of transportation policymaking. (Watch the lecture on YouTube.)
The former congressman delivered a riveting, fact-filled talk on the past 60 years of transportation in the U.S., ending with a litany of gloomy examples of how far the country has fallen behind the rest of the world.
Lorina Popescu of the Pavement Research Center and Jasenka Rakas, Assistant Director of NEXTOR, talk to Oberstar about the effects of Washington's gridlock on research.
He divided the past six decades into four distinct eras beginning in the 1950s with an explosion of vision and investment which resulted not only in the Interstate Highway System, but also led to development of the fastest transatlantic passenger ship, the opening of the St. Lawrence Seaway, and Malcolm McLean’s transformative invention of the shipping container.
Three more eras followed: one of deregulation that led initially to expansion and growth, then an era of consolidation and contraction, and finally the current period which he called an era of disinvestment and decline.
Oberstar peppered his talk with facts and figures, citing the miserable condition of the country’s roads, bridges, and locks.
“Barge traffic from Clinton, Iowa to New Orleans, the world’s most important grain export facility, takes six weeks because the locks are not large enough to handle the barges,” he told the audience.
By contrast he said India, China, and the European Union have embarked on massive transportation projects that will allow them to move people and goods more efficiently and faster.
The E.U. is building a 2,000-mile canal to move goods from the North Sea to the Black Sea. “We can’t even move goods down the Mississippi River,” he added.
He said Tea Party supporters were unable to understand the difference between spending and investing, and called on the business community and academicians to step forward and make transportation “transformative” once again.
--Christine Cosgrove
--Photos by Liz Marxen