The day after an Oakland fire closed the transbay tube and traffic congealed almost everywhere in the Bay Area, Michael Anderson, an assistant professor of economics in the Department of Agricultural and Resource Economics, was pouring over PeMS data on his computer screen. 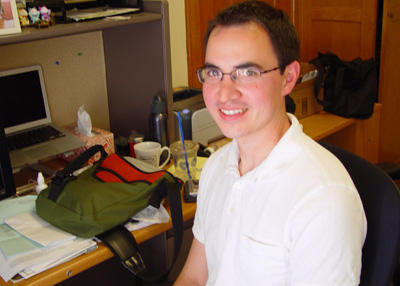 “This is westbound highway 24 just west of the Caldecott tunnel,” he said, pointing to an orange line representing average travel delays every morning from the beginning of the year. The line undulates along the bottom of the chart until June 14--when it sharply spikes to the very top of his screen.
“As you can see, one of these points is not like the others,” laughs Anderson, who is the most recent addition to the Institute’s faculty affiliates. “But it’s not really a surprise that something like this happened.”
Anderson who holds a Ph.D. in economics from MIT, came to Berkeley in 2006 as a post doc at the School of Public Health on a project funded by the Robert Wood Johnson Foundation. Since then, however, he has focused on economics related to the environment and energy, with a particular interest in transportation. The June 14 traffic meltdown was of particular interest.
“If you just look at the aggregate statistics, public transit only carries something like one percent of total vehicle miles traveled, and so there’s sort of a general sense among the public--and even in some of the transportation literature--that we spend a lot of money on public transportation, it carries almost no passengers in terms of passenger miles traveled, and so it doesn’t really have much effect on congestion.”
What people don’t understand, he says, is that public transit is pulling drivers out of their cars from the most congested corridors at the most congested times and putting them on buses and trains. And that has an enormous effect on congestion.
“The Bay Bridge is a huge choke point, and given the passenger flows that go across it, the only reason it isn’t absurdly congested is because BART carries so many people at peak hours.”
Anderson’s research into Los Angeles County’s 35-day metro strike in 2003 showed that even in a car-centric region like Los Angeles, when public transit wasn’t available average delays across all highways increased almost 50 percent. 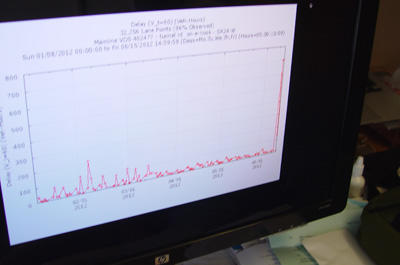 “If a road is already congested and delayed, adding or subtracting one person has a big impact. And that’s what we saw yesterday.”
The sharp spike (far right) in traffic delay on June 14, when the transbay tube was closed due to fire, is reflected in PeMS data recorded beginning in January (far left).
Much of Anderson’s research involves the interplay of economics, transportation and health. In one project, he is examining the long-term effects of pollution on health by looking at two similar groups of people exposed to different amounts of pollutants.
In another he’s studying car weight and mortality. More specifically, he is examining the risk imposed by drivers of larger cars on those who drive smaller vehicles, and how fuel economy regulations could entice consumers to end the arms race of buying heavier vehicles to improve their own safety while endangering others with lighter cars.
“We usually think markets are efficient, but in this case there’s a hidden cost not internalized by the consumer,” he explained. “When you buy a heavier vehicle you yourself are more protected, so from an economic standpoint we call that an internal benefit to the consumer. But you’re purchasing that safety at a cost of making other people less safe. That external risk is not being reflected anywhere in the transaction between the car buyer and car seller.”
Finally, Andersen and a former graduate student who is now teaching at a university in Beijing, are using the Chinese government’s strict lottery system for providing car ownership permits to see what happens to those citizens who win and buy a vehicle. They will observe how car ownership alters residential location, employment, energy usage, and physical activity and obesity.
“We talk about urban sprawl and we think it’s related to people owning cars and driving a lot, but we really have no idea what the causal relationships are. We don’t know if people buy a car and then decide to move out of the city, or want to move out of the city and need to buy a car to do that.”
--Christine Cosgrove