ITS Ph.D.student Yi Liu has received one of ten research stipends awarded nationally as part of the Graduate Research Award Program on Public-Sector Aviation Issues for the academic year 2012-2013. The award is sponsored by the Federal Aviation Administration and the U.S. Department of Transportation. It isadministered by the Airport Cooperative Research Program of the Transportation Research Board. 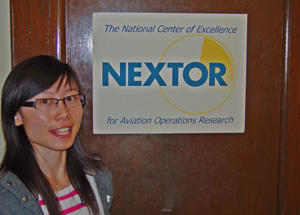 She is the first from UC Berkeley to receive the award, which was based on her research proposal to assist the FAA to implement a performance-based Ground Delay Program (GDP) using multiple criteria. GDPs are implemented to control air traffic volume to airports where the traffic demand is expected to exceed the airport’s acceptance rates for a lengthy period of time. Starting in 1981, GDP usage has grown so that today it is one of the most common air traffic management initiatives.
Liu, who received her Bachelor’s Degree in hydraulic and hydropower engineering from Tsinghua University in China and a Master’s Degree in geotechnical engineering from the Hong Kong University of Science and Engineering, said that after studying soil and water, she’s come to realize that transportation engineering is the perfect area of research for her.
“I’m passionate about this program,” she said, partly because she loves math and partly because transportation is so important in the lives of people. “I’m a social animal, and I want to relate to people and their daily lives,” she added.
She is particularly interested in aviation transportation because of the added complexity of a competitive business environment.
The project for which she won the award is aimed at providing a systematic, goal-oriented way for airlines and traffic flow managers to design GDPs, and this work will become part of her larger doctoral thesis.
Liu came to UC Berkeley from China’s Chongyang County, where her grandfather and father worked as truck and bus drivers.
She works closely with Professor Mark Hansen, Director of the National Center of Excellence for Aviation Operations Research at Berkeley, whom she credits with introducing her to the field of air transportation and mentoring her.
“Whenever I need help, he’s always there,” she said. “I really appreciate his good suggestions and direction and his help in getting me involved in the aviation research community.”