How Do We Finance Transportation Infrastructure 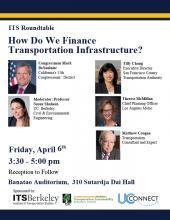 Join us for the ITS Roundtable: How Do We Finance Transportation Infrastructure on Friday April 6, 3:30 - 5:00 p.m. in Banatao Auditorium, 310 Sutardja Dai Hall.

How should we finance transportation infrastructure? While many states are experimenting with Road Usage Charging and California passed a gas tax increase in 2017 (SB1), we will need more funding to keep the nation’s infrastructure safe and operational, and address the needs of other modes such as rail, air, and maritime. Furthermore, emerging technologies, such as automated vehicles, need to be integrated into this infrastructure—requiring policy and rights-of-way changes. This panel will explore the challenges and opportunities to financing transportation infrastructure and preparing for the future, including a range of perspectives—federal, state, and local.

Tilly Chang: Tilly Chang serves as Executive Director of the San Francisco County Transportation Authority.  As the Congestion Management Agency and transportation sales tax administrator for San Francisco, the SFCTA collaborates with public agencies and the private sector to improve transportation options for residents, commuters and visitors alike.  Ms. Chang has two decades of experience, including serving previously as the SFCTA’s Deputy Director for Planning. She has also held posts with the World Bank, Metropolitan Transportation Commission, and a technology startup.  Ms. Chang attended M.I.T. and UC Berkeley and serves on the boards of the California Transportation Foundation, SPUR and UC CONNECT.

Matthew A. Coogan: Mr. Coogan graduated from Harvard College in 1969, and later served as a Loeb Fellow in Advanced Environmental Studies at Harvard's Graduate School of Design. He served as Undersecretary of Transportation for the Commonwealth of Massachusetts, where he helped found the Coalition of Northeastern Governors’ Task Force on High Speed Rail. He has lectured on transportation issues throughout the United States, and in Europe and Asia. He has been featured in Engineering News Record, Architectural Record, The New York Times, USA Today, Bloomberg News Service, The Wall Street Journal and The Washington Post, and has appeared on The Today Show, WNYC, CBS News and National Public Radio.  He is a founding member of the Board of Directors of the International Air-Rail Organization, based in London, England, where is working with local advocacy groups on the redesign of Heathrow Airport.  He was appointed by the National Academy of Science to both the Committee on High Speed Ground Transportation and the Committee to Critique the National Maglev Initiative. In the spring of 2012, Mr. Coogan was appointed by the Transportation Research Board to serve as a member of the National Academy of Science Committee on Intercity Passenger Travel.

Congressman Mark DeSaulnier: Congressman Mark DeSaulnier represents California's 11th Congressional District in the San Francisco East Bay, including a majority of Contra Costa County. In January 2015, he was sworn in as a member of the 114th Congress and appointed to serve on the Committee on Education and the Workforce and the Committee on Oversight and Government Reform. Mark is a former small business owner who has been in public service for the last 25 years. During that time, DeSaulnier passed 61 bills into California law as both a California State Senator and Assembly member. Included in that portfolio is a first-in-the-nation menu labeling bill to address growing obesity. Other landmark legislation he co-authored created a new regional planning approach to solve environmental challenges that no single city can fix on its own. In the California State Senate, DeSaulnier was Chair of the Transportation and Housing Committee where he spearheaded an investigation on issues plaguing the Bay Bridge. In the State Assembly, he received the distinction of being the first freshman in history to chair the Assembly Transportation Committee. He has experience as a Concord City Councilmember, Mayor and as a member of the County Board of Supervisors. On the Board of Supervisors Mark sponsored the Industrial Safety Ordinance and the Refinery Flare Rule for local refineries and chemical facilities, and supported women’s health program and clinics, the children and families budget, children’s report card and performance based budgeting. Further, Mark served as a representative on the California Air and Resources Board and as a board member for the Metropolitan Transportation Commission. Mark was born in Lowell, Massachusetts where he attended Holy Cross. He worked for the Boston juvenile court, as a warehouse worker, and as a hotel services employee. Mark has been a small business owner most of his career. Congressman DeSaulnier lives in Concord where he raised his two sons.

Therese McMillian: Therese McMillan assumed the position of Chief Planning Officer for the Los Angeles County Metropolitan Transportation Authority (“LA Metro”) in April 2016. In that capacity, she provides executive leadership for Metro’s planning, grant funding, and real estate functions. Key initiatives include development of the agency’s recent transportation sales tax ballot Measure M, and countywide long range plan; implementation of county “active transportation” programs; strategic fund program development; and emerging community initiatives such as public health and transportation access. Prior to joining LA Metro, McMillan served as the Acting Administrator for the Federal Transit Administration (FTA) of the US Department of Transportation. During her almost 7 years at FTA, McMillan led reforms in transit safety, emergency response and resiliency investment; capital planning and oversight, and civil rights program development and oversight, including Title VI and ADA. Before her career at FTA, McMillan was Deputy Executive Director of Policy at the Metropolitan Transportation Commission (MTC), the regional planning and funding agency for the ninecounty San Francisco Bay area. During her time with MTC, Therese was an instructor in transportation funding and finance at the Mineta Transportation Institute, San Jose State University.