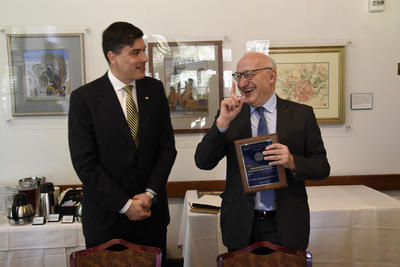 ITS Berkeley had the pleasure of hosting His Excellency Philippe Étienne Ambassador of France in the US on Jan. 14, 2020 for an ITS Distinguished Seminar, where he presented Tech for Good: A French vision for the 4th Industrial Revolution to over 200 students, faculty (including over five National Academy members) and guests from the public in UC Berkeley’s Sibley Auditorium, located in the Bechtel Engineering Center.

ITS Berkeley Director Alexandre Bayen, Professor of Electrical Engineering and Computer Science, opened the lecture by welcoming the Ambassador and his associates to campus, and College of Engineering Dean Tsu-Jae King Liu introduced the ambassador to the audience, who were fully engaged and asked several questions regarding equity, liberties and freedom. Dean Liu also recognized His Excellency Philippe Étienne with a UC Berkeley necktie. 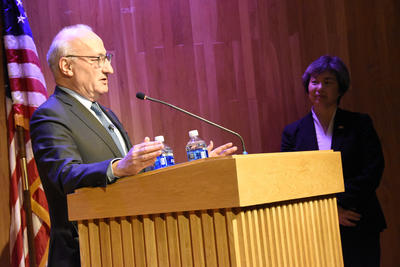 After the lecture, the Ambassador and associates: Emmanuel Lebrun-Damiens, General Consul; Jean-Baptiste Bordes, Science and Technology Attaché; Christophe Barre, Economic Counselor for the Western US; Jules Caron, Communications and Press Attaché; and Juliette Donadieu, Cultural Attachée, had lunch with over 15 French and Francophone professors across three different colleges. He heard from several partners across campus about the France Berkeley Fund, from Executive Director of the France-Berkeley Fund and Professor of Linguistics Larry Hyman, an update on UC Berkeley partnerships with France ,from Bayen, and topics of strategic importance to UC, from Statistics Professor and Chair Sandrine Dudoit. 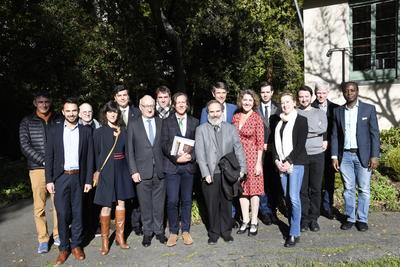 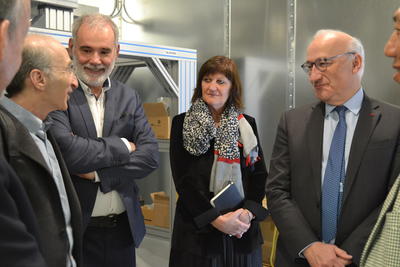 He then toured the Physics department, where he had the opportunity to exchange with Berkeley Lab, UC Berkeley, and CNRS teams of physicists, including Nobel Laureate Saul Perlmutter. Radek Stompor described the commemoration of the Binétruy center, and Perlmutter presented an overview of cosmology at the Centre Pierre Binétruy (CPB). The group also toured the Cosmic Microwave Background Instrumentation Lab of Prof. A. T. Lee. 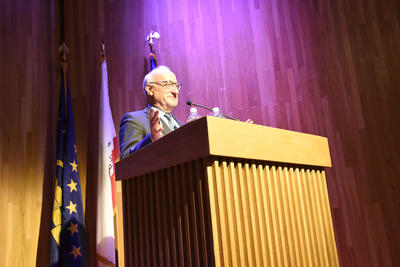 During a speech Tuesday at Sibley Auditorium, Philippe Étienne, the ambassador of France to the United States, said the quickening pace of technological change requires nations to immediately build “shared governance” of the internet through both existing and perhaps new global institutions.

“This requires us to think of physical sovereignty of states differently, a task made harder by the fact that multilateralism is in a crisis,” Étienne said.

Étienne’s visit, which was organized by UC Berkeley’s Institute of Transportation Studies, comes at a time of increased tension between the United States and its transatlantic allies over the future of globalism.

Étienne, though, says international cooperation is needed now more than ever to confront the myriad challenges posed by the internet and advanced technologies like artificial intelligence.

“History teaches us that there is no reason why humanity will not be able to organize itself in a way it did with previous generations in order to maximize (technology’s) benefits and mitigate its risks,” Étienne said. He noted that countries from around the world created the United Nations, the foundation of the post-World War II order, in nearby San Francisco.

But countries need to act now, he said.

“This is not the first time rules and regulations have fallen behind” technology, Étienne said. “But this is the first time (the change) is going so fast.”

For example, the internet has evolved from a decentralized platform for exchanging information into a network that is increasingly under the control of a few big tech firms, he said. As a result, this dynamic has created concentrations of power and wealth in a handful of countries, Étienne said.

Indeed, the Internet Society, a global nonprofit group with a stated focus on the openness and transparency of cyberspace, observed in a report last year that the internet is rapidly consolidating.

“From the dominance of Facebook in social messaging, Google in search and Amazon in online shopping, the largest internet platforms are capturing fundamental human interactions,” according to the report. “This dominance, and the finances and reach that accompany it, enable the platforms to extend their influence and reach into new market spaces.”

Étienne also addressed a trend that experts call the “Balkanization of the internet,” in which the internet becomes clusters of closed systems rather than an open and continuous format for information and services.

China, the world’s second-largest economy, heavily censors the information on its internet platforms, a policy known as the “Great Firewall of China.” India completely shut down online access to its only Muslim-majority province of Kashmir.

“Balkanization raises virtual borders in what was intended to be a vehicle for sharing knowledge without regard for national borders,” according to a blog post from the U.S. Chamber of Commerce Foundation. “The reason this matters is there are very real and costly consequences for segregating what was built to be whole.”

“Complicating data access will produce classes of haves and have-nots — the people and businesses who have the means, knowledge and capacity to navigate an international maze of conflicting technical and legal standards, and those who do not,” the foundation said.

The only way to prevent this digital fragmentation is for countries to work together through international institutions, which also includes entrepreneurs, companies, activists, journalists and non-government organizations, Étienne said.

“The framework since World War II must be adapted to take into account our new global challenges and the new role of new actors,” he said. “We need to reform our international order.”

Last year, he noted, Paris hosted an international conference on artificial intelligence and its impact on workers and society.

“France still believes in the potential of international cooperation,” Étienne said. “France is once again betting on cooperation between the states.”