Kammen Elected to American Academy of Arts and Sciences 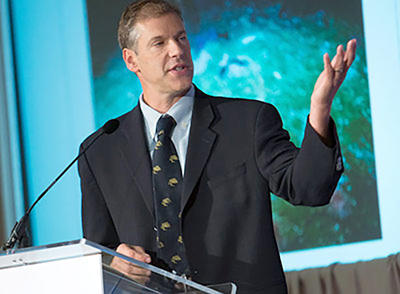 Congratulations to Professor of Energy and ITS Berkeley affiliate Dan Kammen for being elected to the American Academy of Arts and Sciences (AAAS).

He is one of nine UC Berkeley faculty members from a wide range of disciplines who have been elected to the AAAS, a 240-year-old organization honoring the country’s most accomplished artists, scholars, scientists and leaders.

The nine are among 276 new AAAS members from throughout the country and raise Berkeley’s total count of living AAAS members to about 260.

Kathleen Collins, a professor of molecular and cell biology who studies the enzyme telomerase and its role in aging.

Malcolm Feeley, the Claire Sanders Clements Dean’s Professor of Law emeritus. He is a legal scholar who examines issues of federalism, women and crime in the 18th century, prison privatization and the role of bench and bar in fostering political liberalism.

Kris Gutierrez, the Carol Liu Chair in Educational Policy and professor of language, literacy and culture in the Graduate School of Education. She looks at learning in designed learning environments, with special attention to students from non-dominant communities and English learners.

Daniel Kammen, a professor of energy and resources, public policy and nuclear engineering and director of the Renewable and Appropriate Energy Laboratory. He directs research on the energy supply and energy transmission, smart grid and low-carbon energy systems, life-cycle impacts of transportation options and energy for community development in Africa, Asia and Latin America. He is a co-founder of the Transportation Sustainability Research Center at ITS Berkeley.

Dacher Keltner, a professor of psychology and faculty director of UC Berkeley’s Greater Good Science Center. He focuses on the science of emotions, relationships, stress, awe and well-being.

Chung-Pei Ma, the Judy Chandler Webb Professor in the Physical Sciences in the departments of astronomy and physics. She is a cosmologist and astrophysicist who studies dark matter and dark energy, the cosmic microwave background, gravitational lensing, galaxy formation and evolution, supermassive black holes and the large-scale structure of the universe.

Edward Miguel, the Oxfam Professor of Environmental and Resource Economics and faculty director of the Center for Effective Global Action. He is an expert on African economic development.

Richmond Sarpong, professor of chemistry and executive associate dean of the College of Chemistry. He focuses on the synthesis of bioactive complex organic molecules — in particular, those from marine and terrestrial flora and fauna.

Experimental particle physicist Marjorie Shapiro, professor of physics and faculty scientist at Lawrence Berkeley National Laboratory. She probes the most basic interactions in nature and is as part of the ATLAS collaboration at the Large Hadron Collider in Switzerland.

“The members of the class of 2020 have excelled in laboratories and lecture halls, they have amazed on concert stages and in surgical suites, and they have led in board rooms and courtrooms,” said AAAS president David Oxtoby. “With today’s election announcement, these new members are united by a place in history and by an opportunity to shape the future through the Academy’s work to advance the public good.”