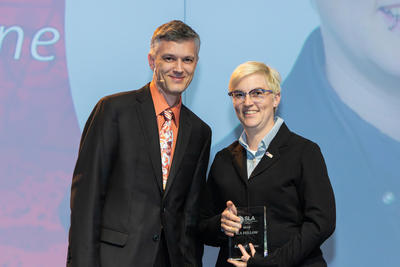 Congratulations to ITS Library Director Kendra K. Levine on being named a Special Libraries Association (SLA) Fellow. SLA is an international association for library professionals founded more than 100 years ago.

“This is a great honor to be recognized for my contributions at the ITS Library and SLA,” says Levine. “I look forward to seeing how the industry evolves and where we go next.”

Fellowship in SLA is bestowed on active, mid-career SLA members in recognition of past, present, and future service to the association and the profession. Fellows are called upon and expected to advise the SLA Board of Directors, prepare necessary documentation, and alert the membership to issues and trends warranting action. Previously, Levine received SLA’s “Rising Star” Award in 2013.

At SLA, Levine co-chaired the Transportation Division in 2013, was president of the San Francisco Bay Area Chapter in 2017, and is the current chair of the Student and New Professionals Advisory Council.

Levine was presented with the honor at the SLA 2019 conference, held Friday, June 14 – Tuesday, June 18, 2019 at the Huntington Conference Center of Cleveland in Cleveland Ohio.

Levine began her career as a student employee in the Transportation Library in 2004 and became circulation manager in 2005. While studying for a dual master's degree in library science and information systems, she continued to work at the library—and joined the SLA. In 2008, she became a research librarian until 2016 when she was named library director.

Levine is a specialist in transportation information, data and research, both print and online, striving to improve access to transportation research and information through data management, publications, and organization.

“ITS is on the leading edge of research, as we move from transportation to mobility,” says Levine. “And the ITS Library is evolving to meet the ever growing and interdisciplinary needs for new mobility knowledge creation.”

In addition to her ITS Library work and SLA contributions, Levine has been an active participant at the Transportation Research Board’s annual meeting, where she promotes both better data management and greater openness, has at on a number of committees and currently co-chairs the Library and Information Science for Transportation committee.