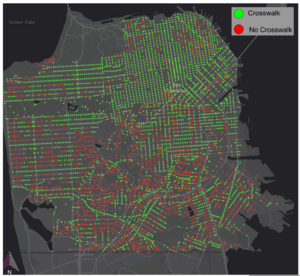 Media appearances on the paper:

He mapped every crosswalk in S.F. The results show a startling safety gap for some neighborhoods - SF Chronicle

Someone Mapped All 3,700+ of SF’s Crosswalks - Funcheap SF

Marked crosswalks are the primary means of safeguarding pedestrian travel at intersections in American cities. In the face of decades-high pedestrian fatalities nationwide, the provision of adequate crosswalks is highly salient. Though, how they are spatially distributed across an entire city, and vary by neighborhood, has drawn little academic scrutiny. Given that, this study utilizes satellite imagery to map the presence of marked crosswalks throughout San Francisco, a dense, walkable city that has struggled to reach its pedestrian-safety goals. For the first time, this allows for a calculation of 'crosswalk coverage' for the city as a wholeManual review of satellite imagery documents that crosswalks are present at 58% of San Francisco’s roughly 6,400 intersections, though they are not evenly distributed across neighborhoodsBoth hotspot analysis and comparing crosswalk coverage by Census tracts demonstrates that northern neighborhoods –even outside of the downtown core–maintain higher percentages of intersections with crosswalks than those in the southern halfIntersections exhibit crosswalk ‘corridor effects,’ in that crosswalks often cluster along certain streets, including (but not limited to) commercial areasIn addition, crosswalks in four neighborhoods were analyzed to a deeper extent, including category (e.g. ladder, continental, standard), condition, and ‘completeness’ or the number of adjacent blocks with a connecting crosswalkAcross these roughly 1,000 intersections, coverage varied from 51% in the Bayview (a historic African American community) to 83% in Pacific Heights (a high-income, majority-white neighborhood)Though these patterns track somewhat with local pedestrian and automobile volumes, crosswalk coverage diverges from these data in many ways, indicating other factors at play in their distribution. Overall, satellite imagery can be used to identify marked crosswalks at scale, evaluate their quality, and probe geographic variationArmed with such granular data, planners can consider the ways in which crosswalks are present throughout cities — and where notable gaps exist — in their pursuit of Vision Zero goals.