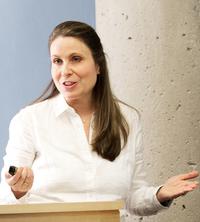 Congratulations to Transportation Sustainability Research Center Co- Director Susan Shaheen, who has been named Vice Chair of the Transportation Research Board Executive Committee.

Dr. Marcia McNutt, president of the National Academy of Sciences, recently approved appointments for the TRB Executive Committee. Carlos Braceras, Executive Director of the Utah Department of Transportation, will become Chair of the Executive Committee at the completion of the TRB Annual Meeting on January 16, 2020, when Shaheen becomes Vice President.

Marie Therese Dominguez, the Commissioner of New York State DOT, and Mike Goodchild, a geographer and GIS expert from the University of California at Santa Barbara, will become new members of the Executive Committee. Nathaniel Ford, CEO of the Jacksonville Transit Authority; Patrick McKenna, Director of the Missouri DOT; and James Tien of the University of Miami; have all been appointed to a second three-year term.

Braceras began his tenure as Executive Director of the Utah Department of Transportation (UDOT) in May 2013. In this capacity, he is responsible for UDOT's more than 1,600 employees and the design, construction, and maintenance of Utah's 6,000-mile system of roads and highways. Braceras joined UDOT in 1986. Prior to his appointment as executive director, he served as deputy director for 12 years. Braceras has also served as the director of UDOT's Region Three Office, chief geotechnical engineer, chief value engineer, a member of the Legacy Parkway/I-15 North Project team, and as a roadway design engineer. He is President of the board of directors for the American Association of Highway and Transportation Officials (AASHTO) and is also a member and past president of the board of directors of the Intelligent Transportation Society of America. Braceras earned his undergraduate degree in Geology from the University of Vermont and an undergraduate degree in Civil Engineering from the University of Utah. He is a registered professional engineer.

The TRB Executive Committee is the senior policy body of TRB, and provides oversight to ensure that TRB's activities are appropriate for the National Academies and constructive to the transportation system and the nation. Ongoing and proposed TRB projects are addressed during each Executive Committee meeting and are approved, rejected, or accepted after modification. The committee is composed of approximately 25 members. Members are appointed by McNutt and are selected to provide a balanced representation of transportation modes, academic disciplines, private and public sectors, levels of government, geographical regions, and other relevant factors. Members are appointed for a term of three years and may be reappointed for one term.